Where is this thing going?

Asking a kindergartener to tell you a story is always an interesting task, one surely filled with adventurous intrigue, but that may also try the patience of even the most hearty of souls. One tends to wonder, ‘Where is this thing going?,’ often including the storyteller, who may not be at all sure until the plot hits an unforeseen roadblock. To assist the design and outcome of such undertaking – while fostering its creative merits – Merrick has recently designed an ingenious unit for the Eagles. It all began with a box of Beenie-Babies donated to the class a few weeks back. The kindergartners have used them in myriad stories, of course, often as puppets and always meandering, twisting and turning between the sweeping epic and the intimate romance. Having heard many such tales, Merrick decided to help his students in casting a more concrete form for their various narratives. Their goal is to present a finished story with a clear moral to preschoolers approximately three weeks from now, an outcome for which they’ll embark on a short field trip, probably down Oak Street. Their stories therefore need to be understandable to their audience, which is a highly ambitious goal. So, to get there, they need a lot of practice and a lot of strategy. First, they’ve each chosen a stuffy to be used as visual aid. Next, one at a time, they told a draft narrative to Merrick, out loud, using the stuffy as puppet. Merrick asked questions and offered clarification, in part to help flesh out compelling details, and in part to lead them to a clear moral. In the process, they needed to arrange their ideas, stay on topic, and figure out which portions they may keep and others they may leave out. Tricky stuff for any storyteller of any age. Following the Q and A, the students began the processes of synthesizing and streamlining. They each folded a sheet of paper into eight panels, then conceptualized their plot as a comic storyboard. How does it begin? Then what happens? Then what? Such a process is instrumental, even for seasoned authors, since it causes the writer to focus on specifics in realizing a comprehensible subject matter. What are the main eight parts of your story? That question is worth answering for most adults. Using both words and pictures, the Eagles transferred their ideas to their storyboards, which served as their second draft. Of course, they’re also interested in each other’s ideas, so they ended up telling their story numerous times to each other, a process that works well, provided that they keep the story more or less static – especially the moral – so that they know where they’re going as they add new ideas. Otherwise, they may get flung off the rails with their own creativity. They’ve told each other what they are drawing, too, which has helped them to strengthen their ideas and advance their scripts. The next step, happening this week, involves Merrick assisting them in making edits. Much like the process begun out loud, they’re now using paper to clarify the problem and solution in their respective plots. They need their key ideas to be in writing too, and for (at least) two key reasons: to retain consistency and to help further their own literacy skills. That way, as they tell the story to the preschoolers, they’ll also be reading off of their own scripts. Therefore, during the process of revision, the script – in writing and in idea – will likely become shorter so as to be more clear. In the process, they’re also helping themselves to learn key aspects of spelling and detail. Merrick has assured them that it’s OK if their stories go over the eight panels. But, before they make that decision, they need to stick with the central ideas. All aspiring authors should have such guidance. 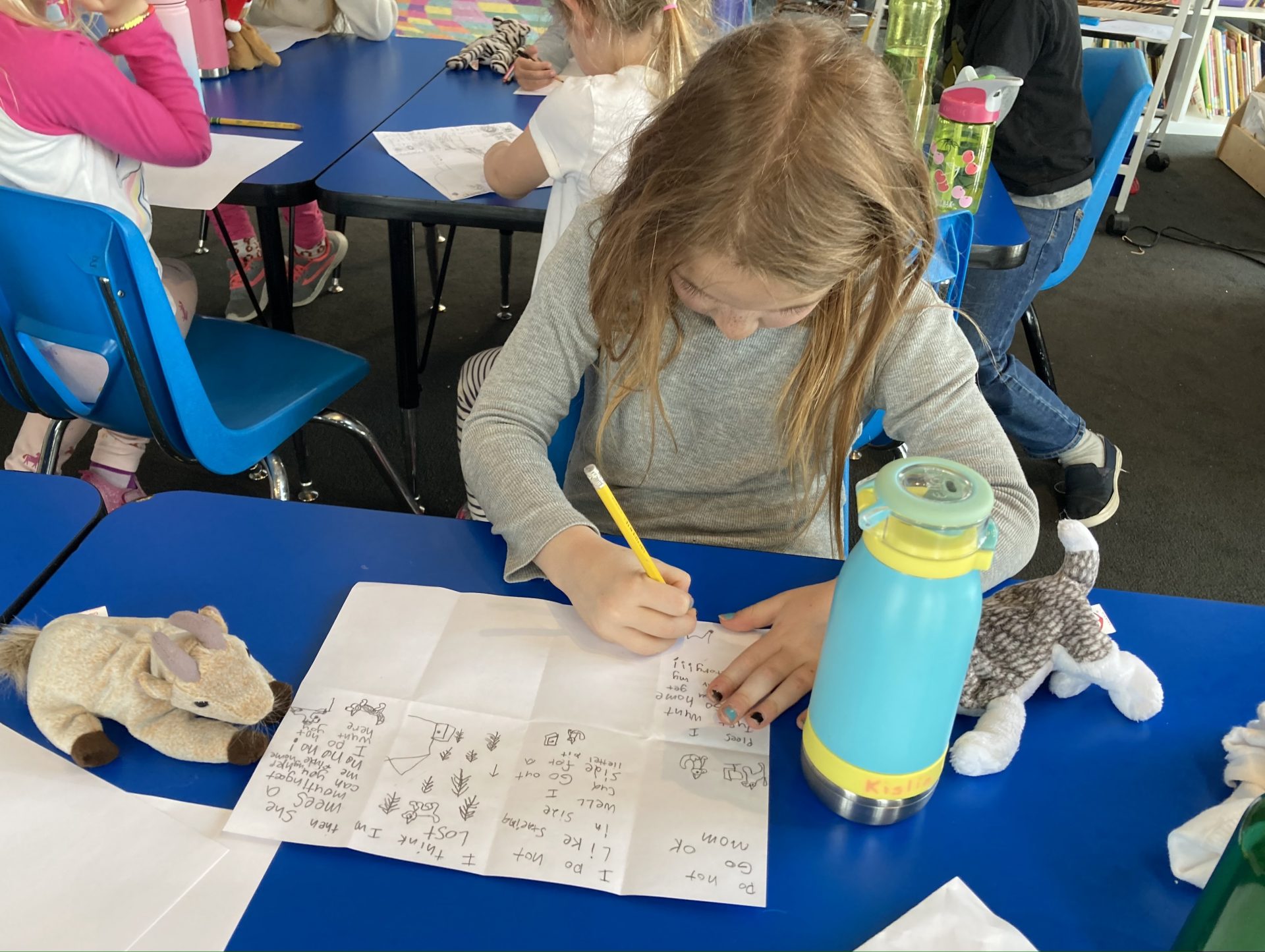 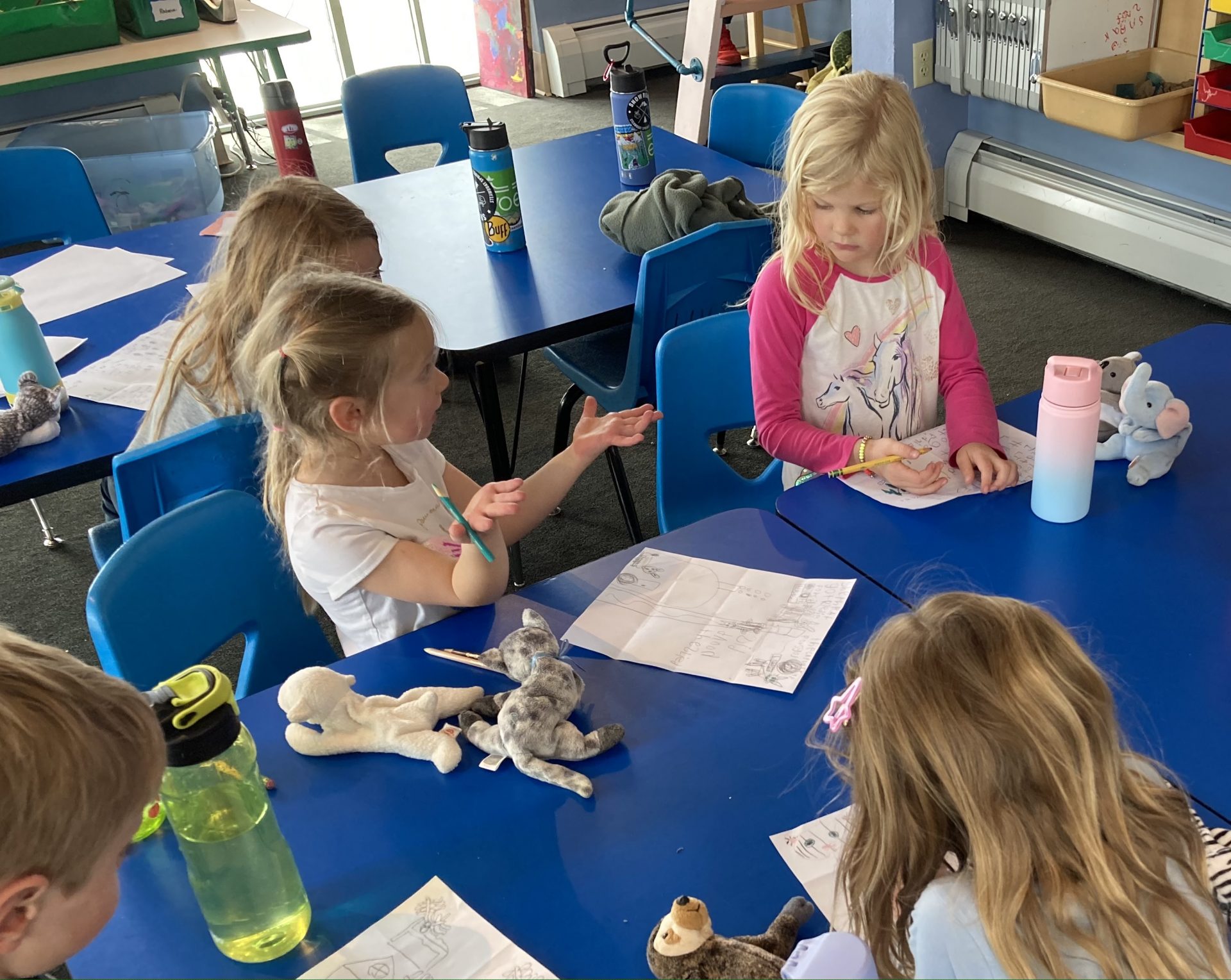 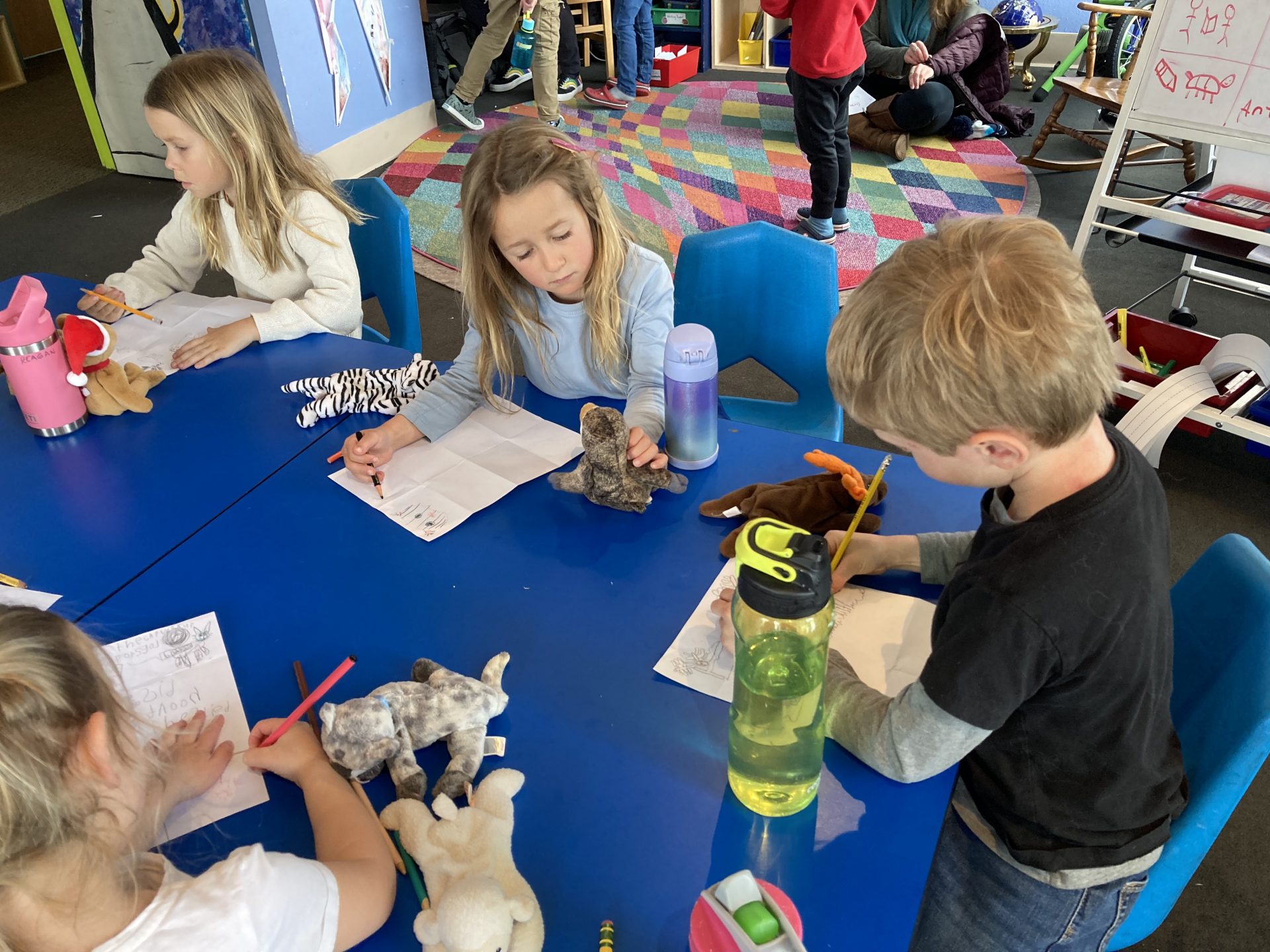 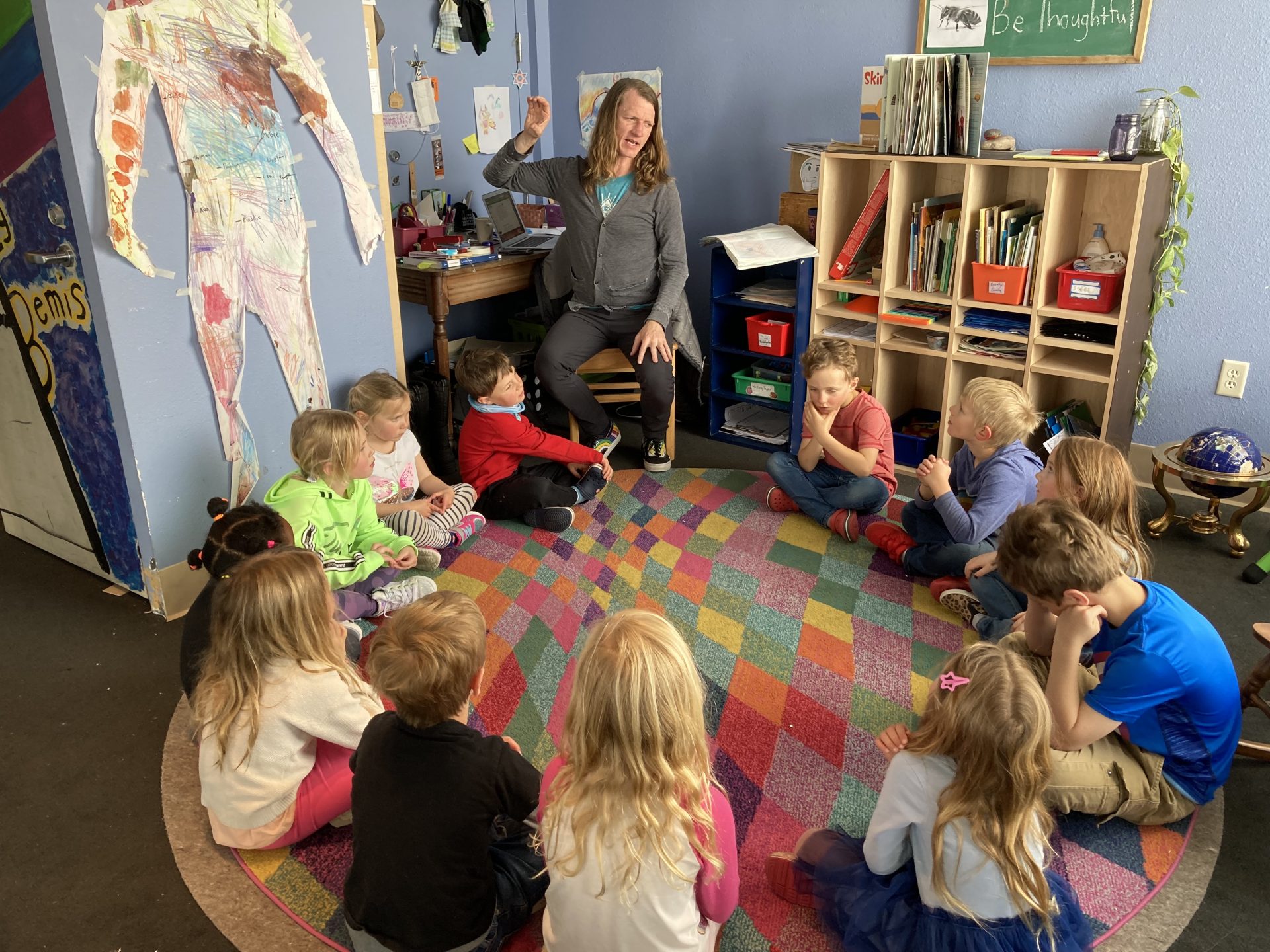 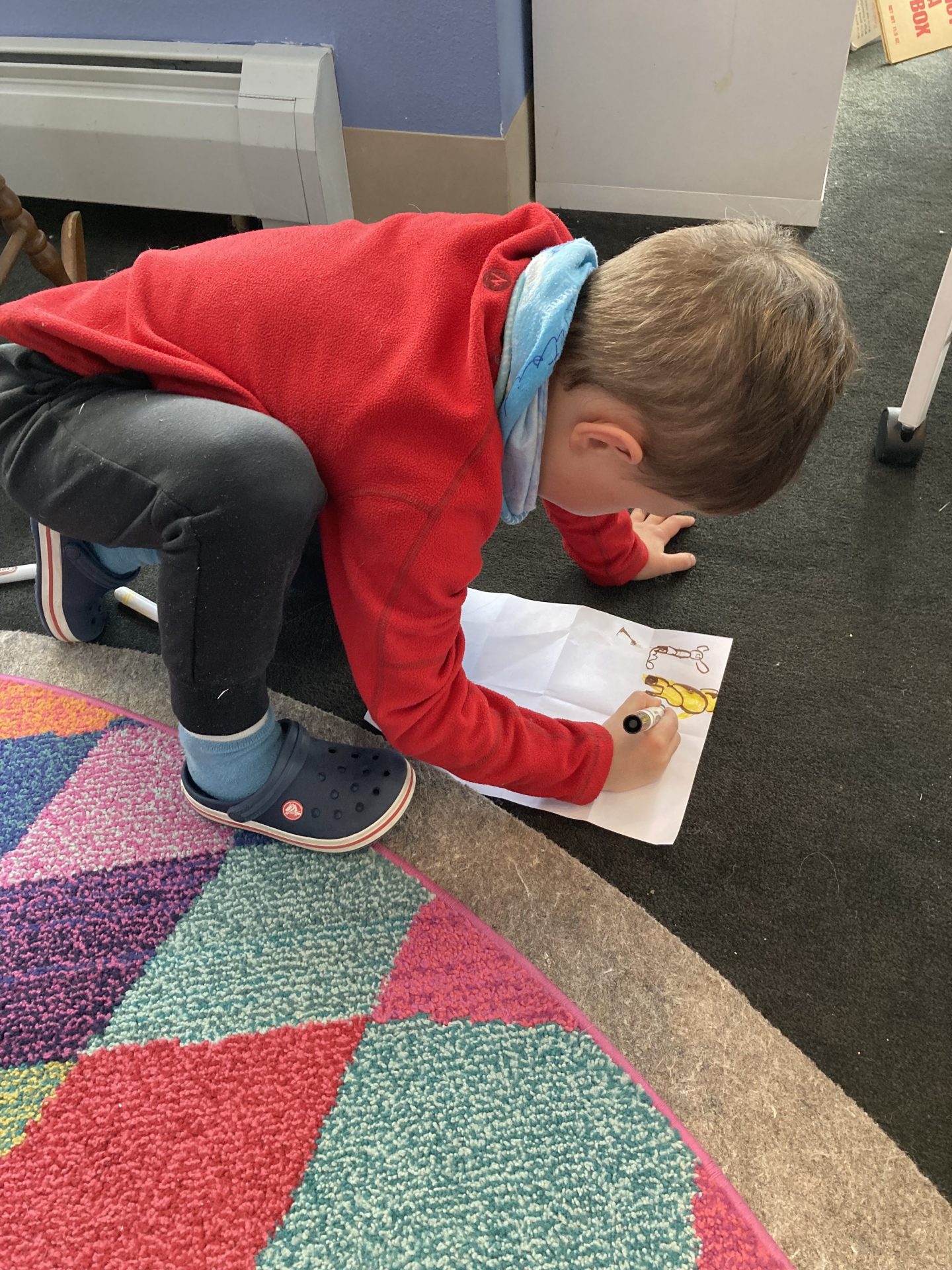 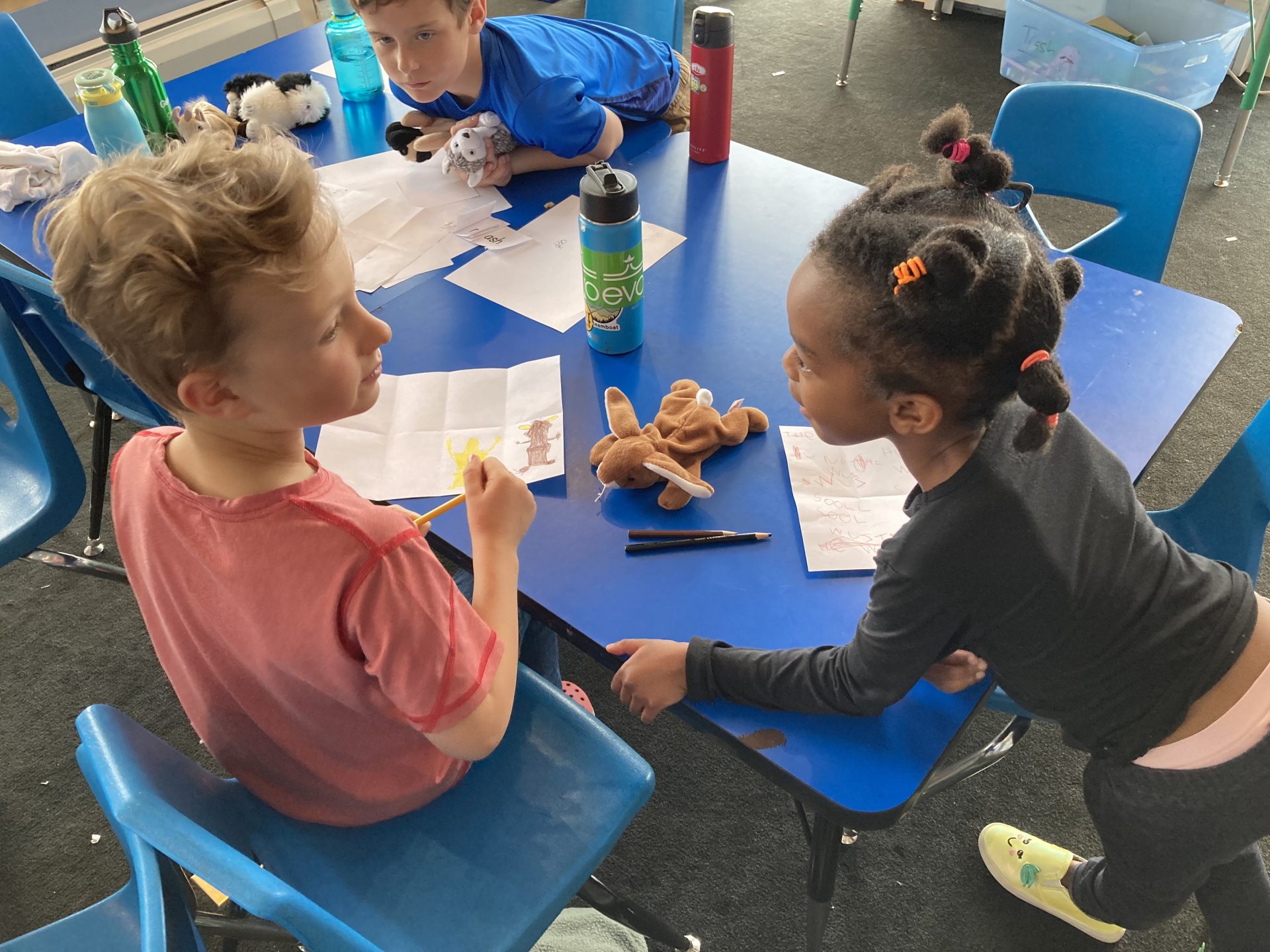