One of the things I love about teaching at SMS is the organic sense of collaboration, always centered on student engagement and that invariably leads to deep thinking and engaging results. Sometimes it’s carefully constructed and occurs over weeks and even months of detailed planning. Other times, it happens on the fly, over faculty meetings or during recess duty, when minds come together, discuss what’s happening in their classrooms, find overlaps, and interweave ideas. Lately, for example, the 1-2 have been studying the Olympics – its history and relation to our storied town – and they’ve broadened their local perspectives while researching a foreign country and its association with the event. Meanwhile, the 3-4 has been researching the history of Steamboat – including but certainly not limited to the Olympics – and they’re using their findings to design and eventually produce a newspaper. A couple weeks back, Jen, Keri, Dave, and Gaby saw a great chance to merge the concepts around a guest speaker, SMS’s own Johnny Spillane (insiders or course know already that he’s the first American to win a medal in the Nordic Combined). Johnny spoke with both classes as prelude to a science experiment regarding ski jumping. The students explored some key scientific considerations of the sport, and Johnny offered personal insight on the ways in which the athlete makes use of technology and specific technique to cause the ski to ‘float’ on the air during a jump. Much like the mechanics involved in flight, exact angles and proportions are key to success, which in this case involves both the length of the jump and the jumper’s form throughout the process of landing it. Students then broke into teams to design their own jumpers and jumps; for the former, they used pipe cleaners, paper, straws, and tape, and for the latter they strategized the best configuration using materials in the STEAM lab. They gained further insight from fellow classmates currently learning the ropes of the actual sport of ski jumping through Winter Sports Club. As with any good STEAM challenge, the process involved lots of trial, error, reassessment, and redesign. During the first attempt, only three jumpers made it all the way off the jump, so students needed to redetermine their launch angles, the surface of the jump, and the weights of their jumpers. The revision process extended over a weekend, which gave everyone time to think carefully about the process and how to make small adjustments. The following Monday, round 2 was a great success; most jumpers made it off the jump, and several even landed successfully. At the end, medals were awarded to the gold, silver, and bronze jumpers, accompanied by a rousing rendition of the Star Spangled Banner. 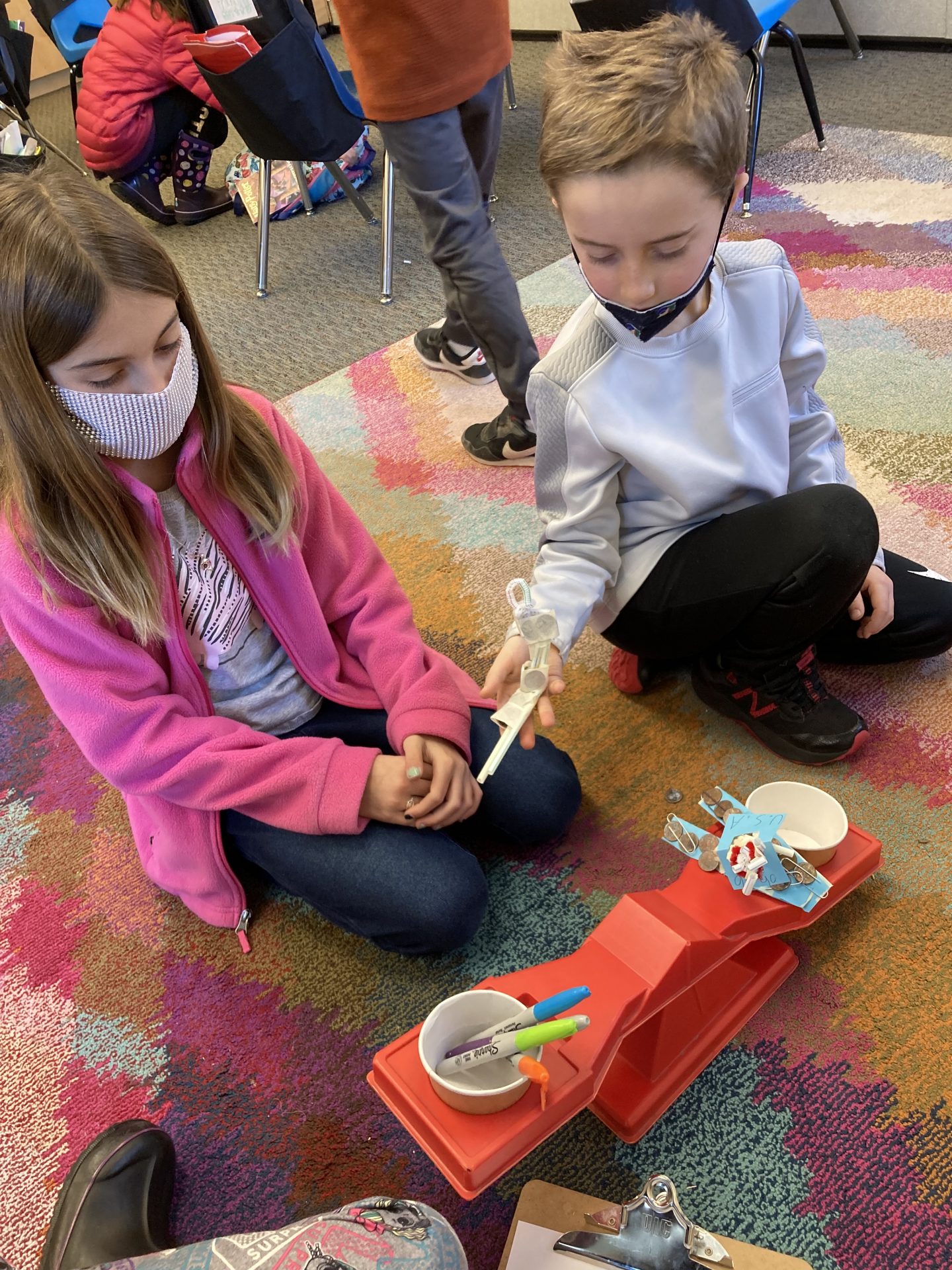 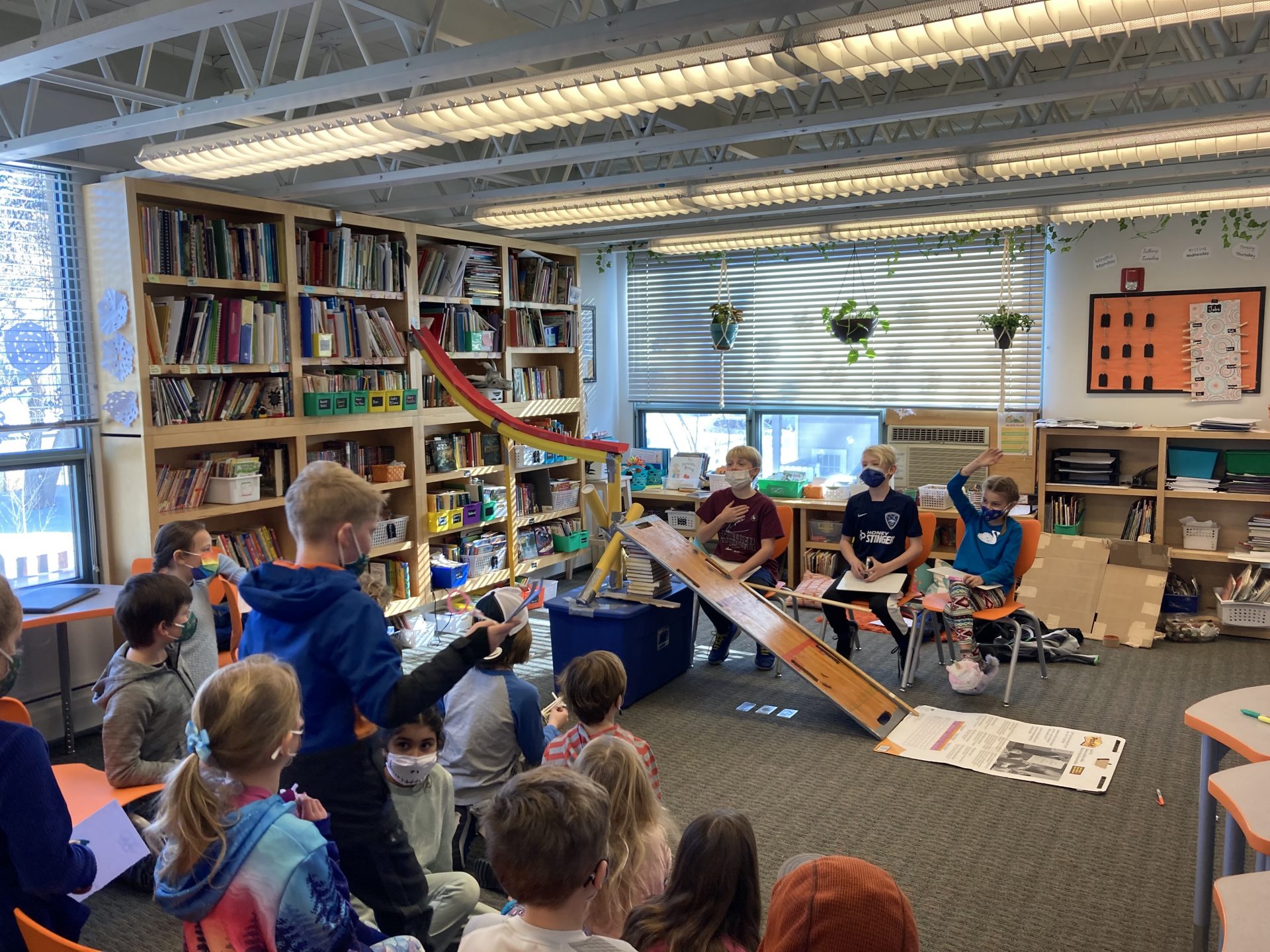 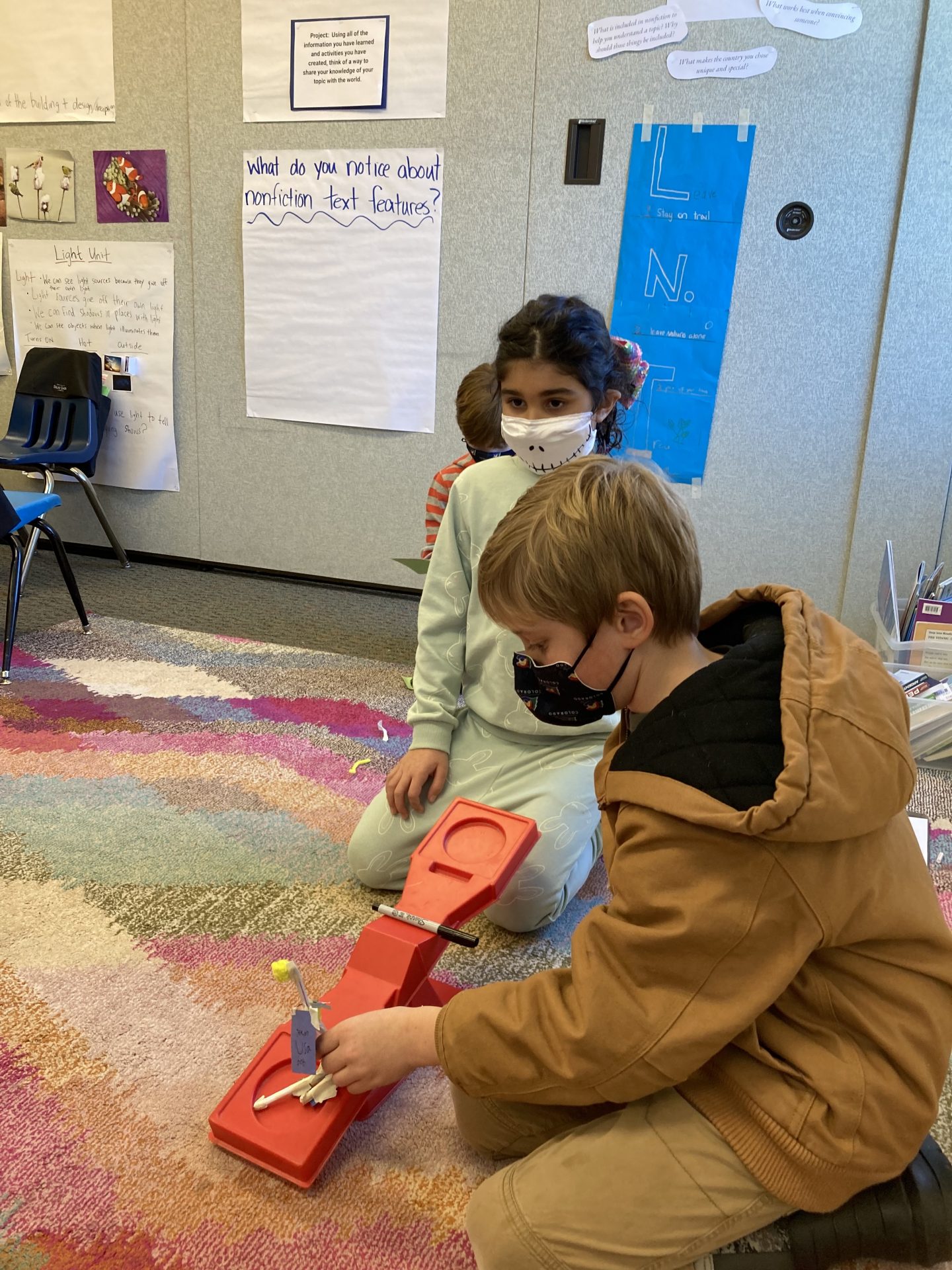 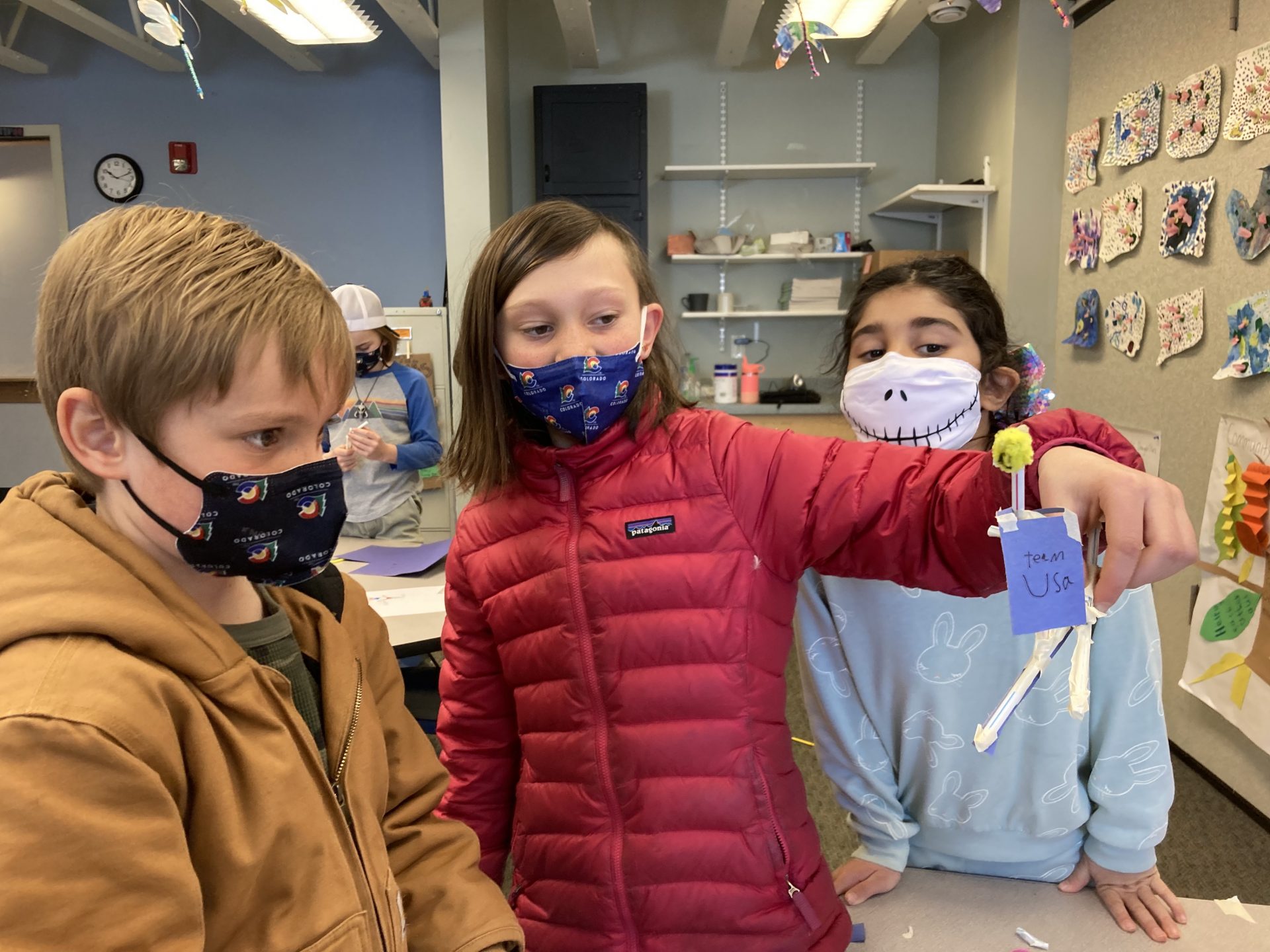 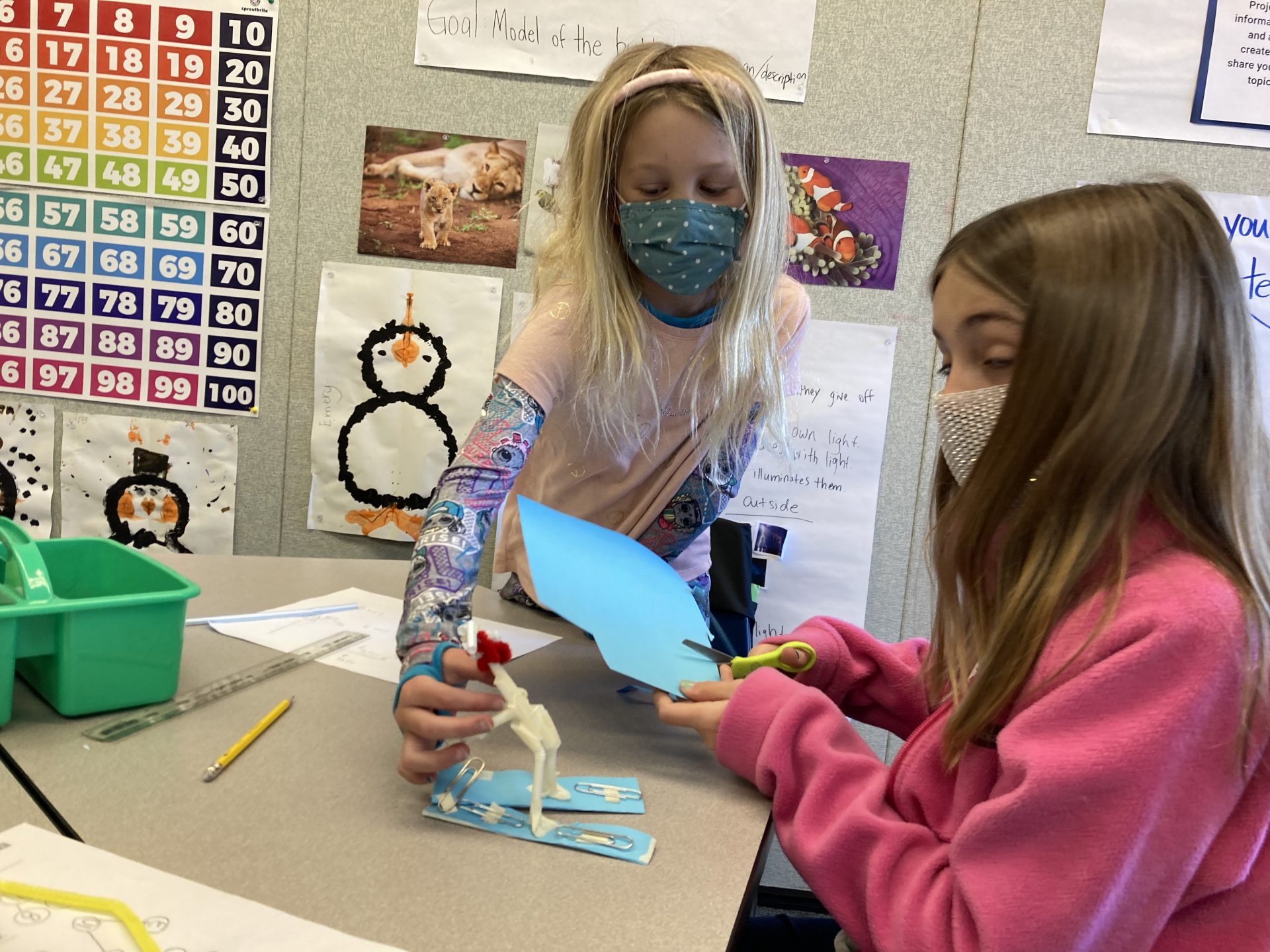